The San people, also referred to as “Bushmen”, have historically been marginalized by the European colonizers and African Bantu tribes. The word ‘San’ refers to the collective of different San communities in Namibia such as the Ju/’hoansi, !Kung, Hai//om people, that belong to the same ethno-linguistic group. These people are nomadic hunter-gatherers of Southern Africa and probably the first peoples in human history.

As European colonizers occupied lands in Southern Africa, they killed and chased away San communities to arid lands such as the Kalahari desert. San peoples don’t come from there, but were pushed to live there violently, and still found ways to survive. Other African Bantu tribes have generally looked down upon San people as they were historically nomads with no ‘possession’ such as cattle and did not practice warfare. During 1904-1908, the German colonial administration committed the ‘first genocide of the twentieth century’ in Namibia. Although the genocide was directed to the Ovaherero and Nama communities, the effects of the manner in which the German troops and colonial administration conducted the war had much broader effects on other Namibian communities including the San as evidenced by the names of members of San community listed on the Shark Island camp in Luderitz as well as other Namibian communities. Compared to other tribes in Namibia, the San were also physically smaller people than the Bantu tribes, who enslaved and oppressed San people. Bantu tribes such as the Aawambo, Kavango, OvaHimba and OvaHerero hailing from east African lakes entered current day Namibia between the 14th and 17th century, where at the time the San were the only inhabitants of the area. The biased mentality towards San people is still very much present in contemporary society, which affects their socio-economic, cultural and political position in the country. 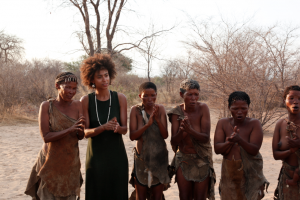 Namibia was first colonized by the German empire (1890-1915). In 1904-1908, the Germans perpetrated a genocide, killing 80% of the Herero and 50% of the Nama people. This genocide is referred to as the first German holocaust of the 20th century. After WWI, Namibia, then referred to as (German) South West Africa was given to South Africa, subsequently falling under the rule of apartheid from 1948 until Namibia’s independence on 21 March 1990. During the thirty-year war for independence, which was led by the South West African People’s Organisation (SWAPO) from the 1960s, San people were used by the South African army as trackers to find and kill freedom fighters, and thus have them killed. This has given San people the reputation of traitors in Namibia, leaving them in dire conditions since independence.

In 2015, the National San Council was launched in Windhoek, Namibia’s capital, to advocate for the improvement of San matters in social, economic, and political arena’s.  This year also marked the first San representative in the government. Until then, the San had been excluded from all decision- making. 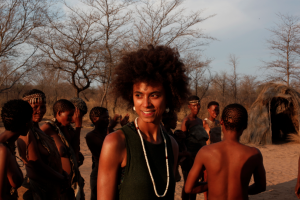 Until today, San people explain how other tribes in Namibia do not regard them as ‘full’ human beings and stigmatization takes places in all aspects of life such as education, work, and healthcare. San people lack basic access to opportunities in life. Many are stuck on farms owned by Afrikaner Boers, who pay for their labour in food and drinks. Because of this, San labour workers will never be able to save money and leave these farms. It’s modern day slavery. They live in outright poverty, causing malnutrition, school dropouts, rampant alcoholism, which subsequently results in gender-based violence, child neglect, and overall social collapse. This affects many indigenous communities in Namibia – and worldwide – culture, knowledge, and art. This negative spiral dominates what one reads in the media about the San: unable to function in the modern world and communities devastated by problems. In Windhoek, you find many neglected San orphans on the streets in the worst conditions.

Namibia is becoming an ever-more popular tourist destination. Much of the tourism in regions where San communities live is based on visiting “Living Museums”, where tourists get a peak into ancient knowledge of day-to-day survival in the area. Although this generates income for communities, this form of commercialized tourism also feeds into the persistence of an image of the San as an archaic people, that have remained “primitive”. The San are portrayed as part of the flora and fauna for ones safari trip, not as amazing performers, wise, skillful people, who have a beautiful, deep musical culture – not to mention their immaculate knowledge of nature.

In 2015, percussionist/producer Sjahin During and I founded Namibian Tales, an acoustic quartet based in Amsterdam with cellist Bence Huszar and Debby Korfmacher on mbira, kora and vocals. The aim was to delve into the rich musical traditions of Namibia and create our own contemporary sound inspired by the songs, tales and rhythms of Namibia. Our aim with Namibian Tales’ second album “Kalahari Encounters” was to counter negative stereotypes and showcase the valuable cultural heritage through performance and media. This resulted in a two-year project in partnership with the Museums Association of Namibia and UNESCO IFCD Fund. We recorded many songs in various villages around the Kalahari, which are to be archived for future generations. We created music videos and a live album with songs that we learnt from four San women of the Ju’/hoansi tribe who live in //Xao /oba village, Namibia. The album contains our arrangements of traditional San songs, which won Best World Music Production in the Netherlands 2017 and is titled “Kalahari Encounters”. The album was recorded live in Windhoek where we held concerts. Our first concert was in Tsumkwe, where onlookers were shocked to see San women rocking the stage with a bunch of Windhoekers and Europeans. In 2018, we organized a unique tour through Europe with the four San ladies, with performances in Netherlands, Belgium, Germany, and Austria. Our first show was a sold-out to capacity at the Bimhuis, Amsterdam on 5th July 2018. Our work is a homage to this beautiful culture, which is fading much too rapidly through global capitalist pressures. Hopefully, what we have recorded will inspire many others, especially the youngsters, to cherish this heritage as much as it has inspired us.

As for us, it’s been a humbling experience to say the least. Being able to get to know the people in the village, experience the music, learn about it and share personal time together has enriched this project immensely. It has inspired us all as musicians and I think for both sides, we’ve learnt entirely new types of music working together, new sounds, new expressions. We’ve experienced nature in ways unknown to us previously. And it has put our own perspectives into perspective. We’ve lived with people who have a complete other lifestyle. We’ve visited each others homes and met each others family, shared meals, laughed, and created music together. We’ve learned to cherish these local stories see the importance of working with elders and oppressed communities as they have knowledge that we don’t. It’s inspired us to find out more about our own heritages, wherever they lie. It has truly been an unforgettable experience for us all.

Shishani is a talented singer-songwriter loved for her smooth and powerful voice. Her roots are Namibian and Belgian in origin, but she grew up mainly in the Netherlands. In her work, she brings these worlds together. Her music is comforting and has a thread of strong social consciousness running through it. During her career, she has won a host of awards for her work. In 2011, she returned to her country of birth where her career took off as a political singer-songwriter. As the first openly ‘out’ singer she became a role model for the LGBTIQ community in Namibia. She created various events and platforms to raise social issues through the arts. Since then she has been living and working between Namibia and the Netherlands. With her quartet Namibian Tales, founded in 2015, she developed herself as an anthropologist/musicologist and coordinator working on international collaborations and cultural exchange. With the UNESCO-supported project “Kalahari Encounters” Namibian Tales focused on the archiving and promotion of the cultural heritage of the San people, one of the most marginalized groups in the country. Her work compasses both academic and artistic arena’s leading to profound intersections. More info on: www.shishani.nl

We are always looking for new authors. If you’ve got an idea that will contribute to the Counter/Narratives platform and challenge our readers, let us know. Also, if you have a story to tell, but you need some assistance to put it on paper, please do not hesitate to contact us.

Email us your submission to counternarratives2018@gmail.com

by writing a short pitch paired with an outline. We publish Dutch and English articles.